Safety is at the heart of all the Mont-Blanc Tunnel’s teams’ daily decisions and missions.

New equipment has been installed to optimise the safety of the tunnel, and studies concerning fire-fighting are regularly carried out.

In 2000, a new 400 million program of works was drawn up, due to the joint action of the administrative authorities, the security services, the concessionary companies ATMB and SITMB, and the Mont-Blanc Tunnel - GEIE (TMB-GEIE). This programme was built around 4 main axes: the renewing of security installations, reinforcing security methods, the creation of a single operating structure in 2001, and the implementation of new traffic regulations.
This led to the opening in 2002 of a new tunnel which complied to very high requirements regarding  security, with optimal bi-national integrated organisation and the most modern equipment: piloted by computerised and centralised safety devices, automatic incident detection based on the analysis of 35 000 items of data collected in the tunnel (cameras, sensors…), permanent presence of firemen in intervention posts situated on the two tunnel aprons and at the centre of the tunnel, new methods of protection for tunnel users (new conception of safe shelters) and traffic management in case of an incident (half barriers through the length of the tunnel, communication of safety instructions via car radios for those using the tunnel), etc.. 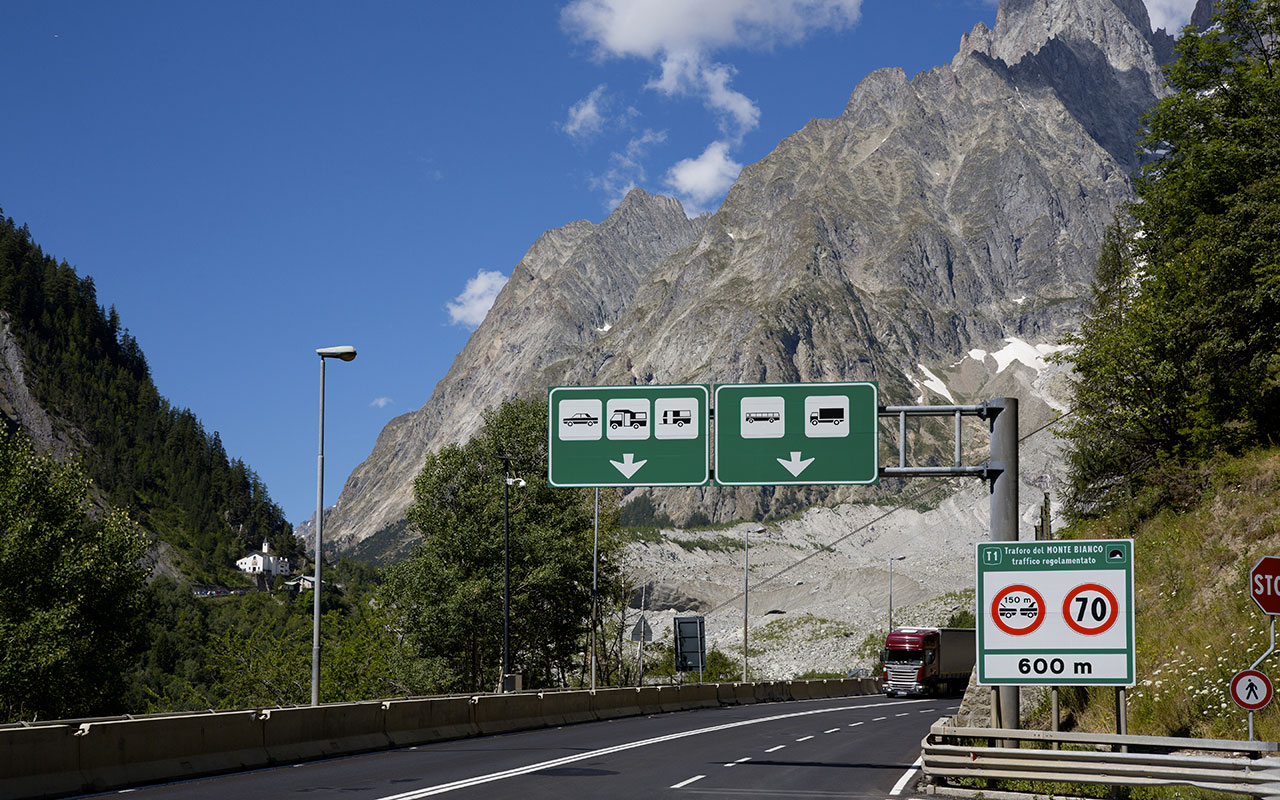 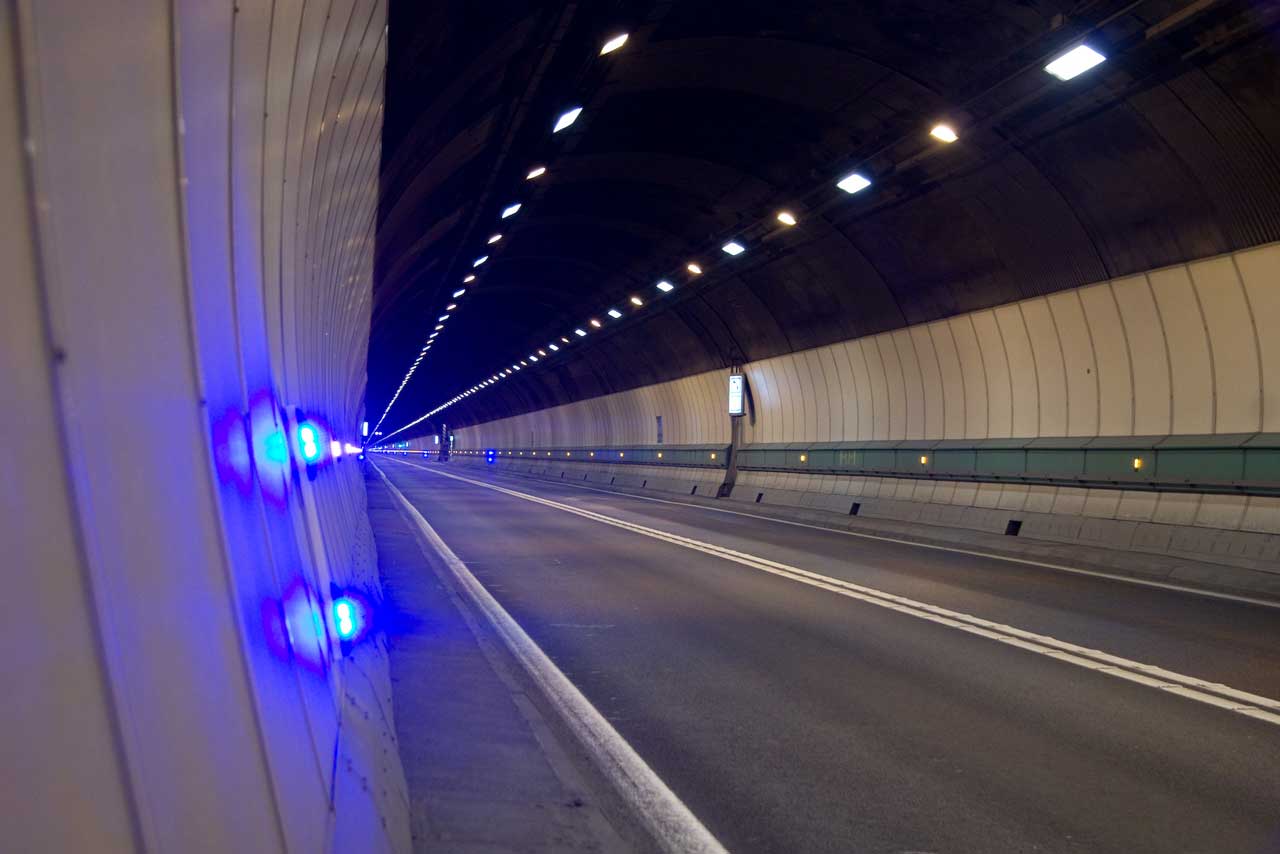 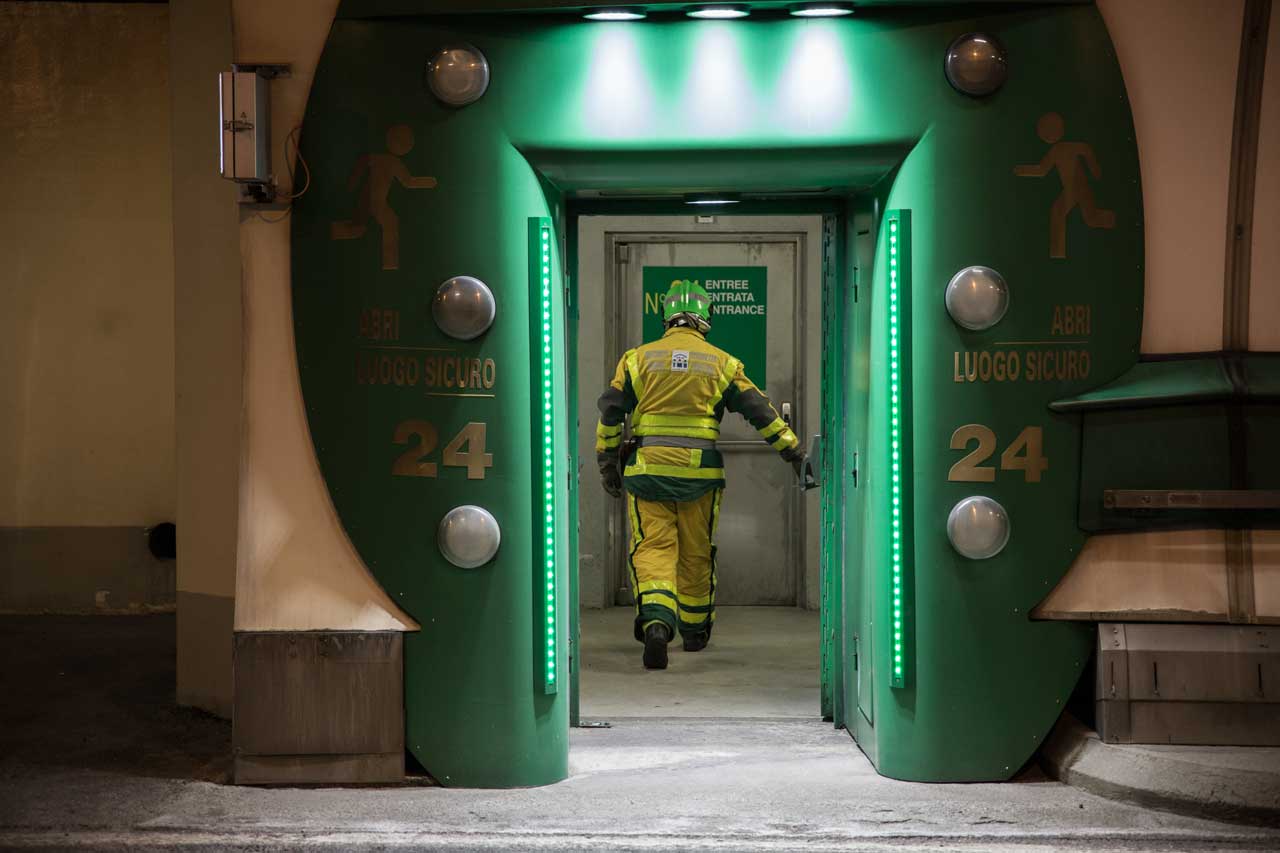 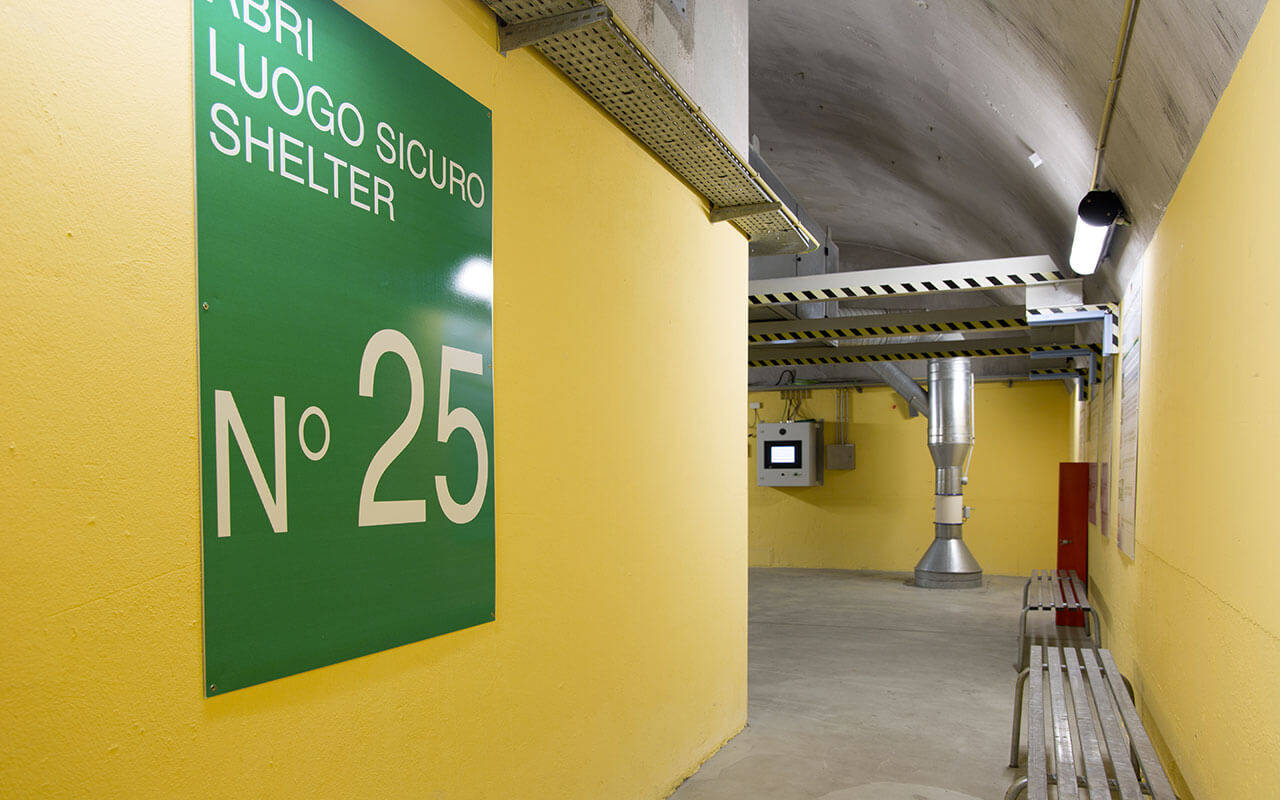 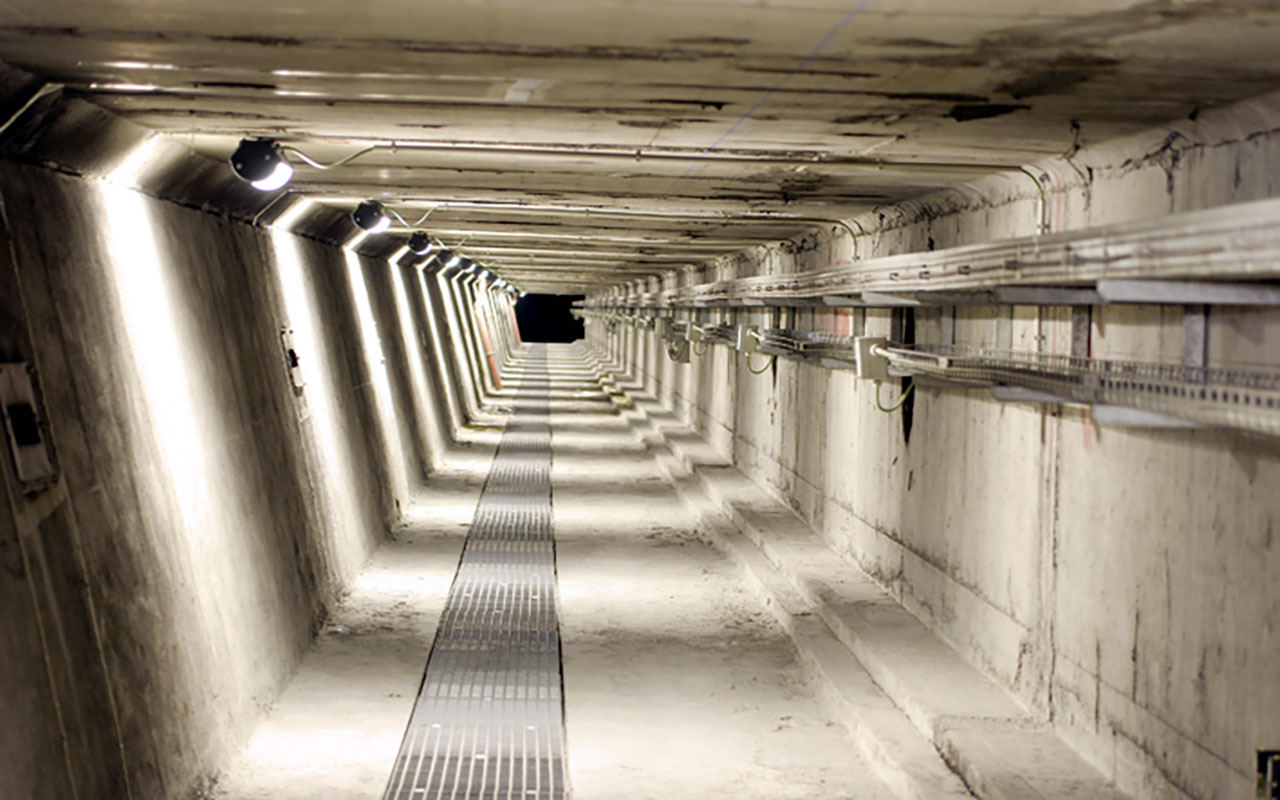 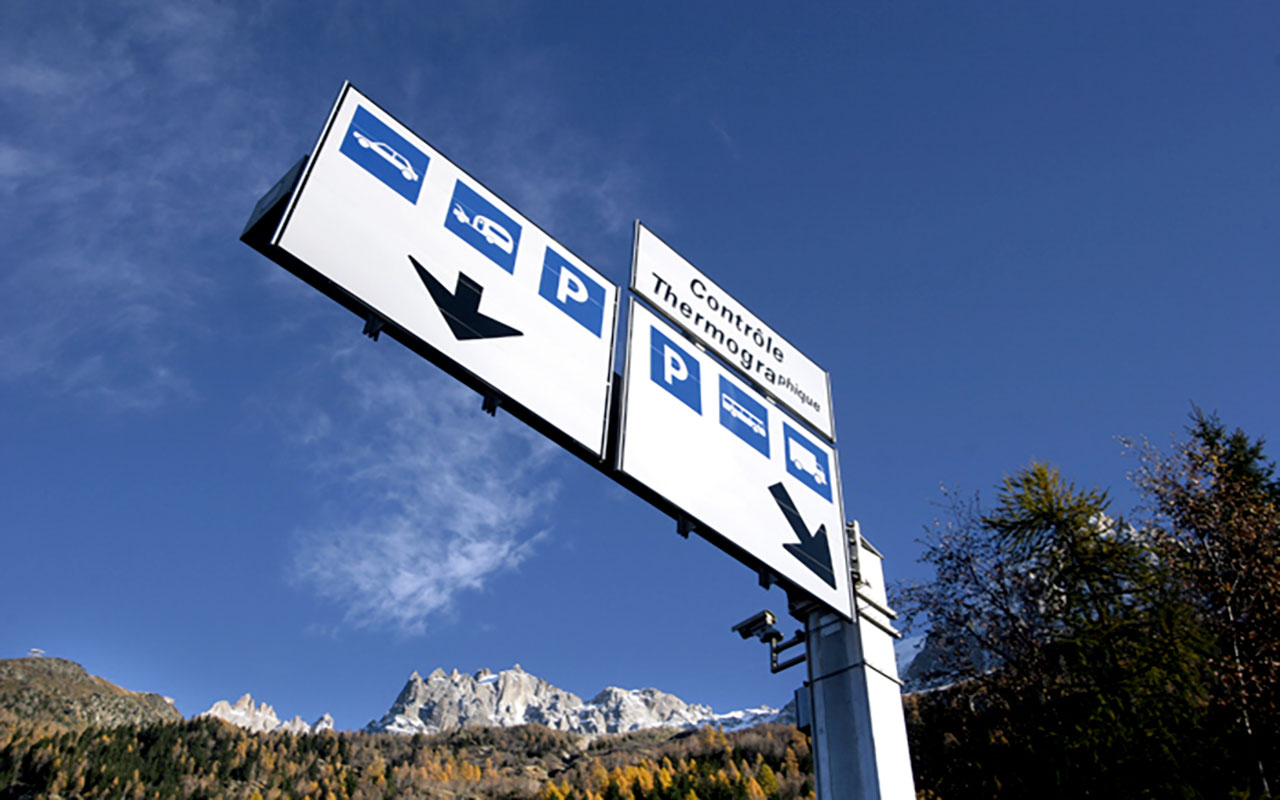 Since the re-opening in 2002, investment is made each year to provide the security services in the Mont-Blanc Tunnel with the most recent technology. Innovation therefore becomes a pillar of the Tunnel’s safety policy. Watching that the technology is state-of-the-art, improving and renovating equipment, the managers and employees are committed to maintaining a tunnel which is among the best examples worldwide concerning security issues. 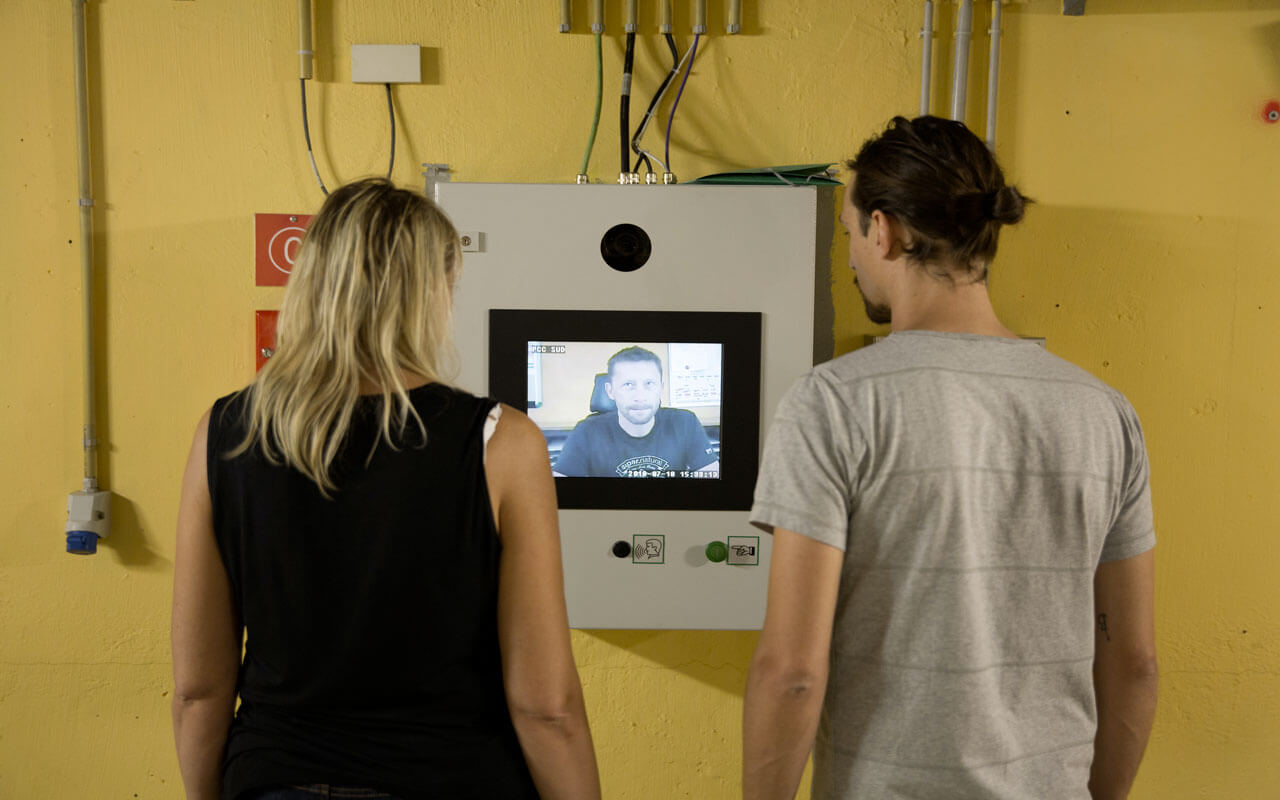 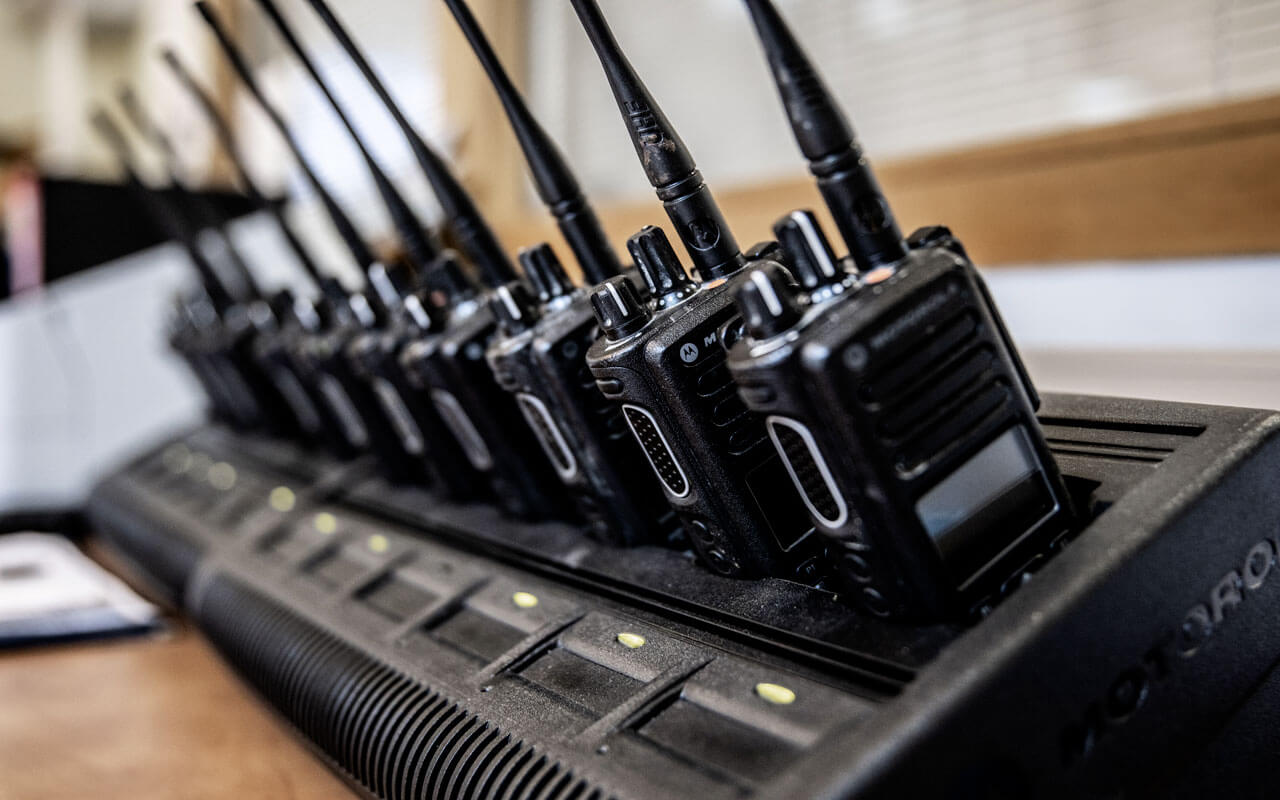 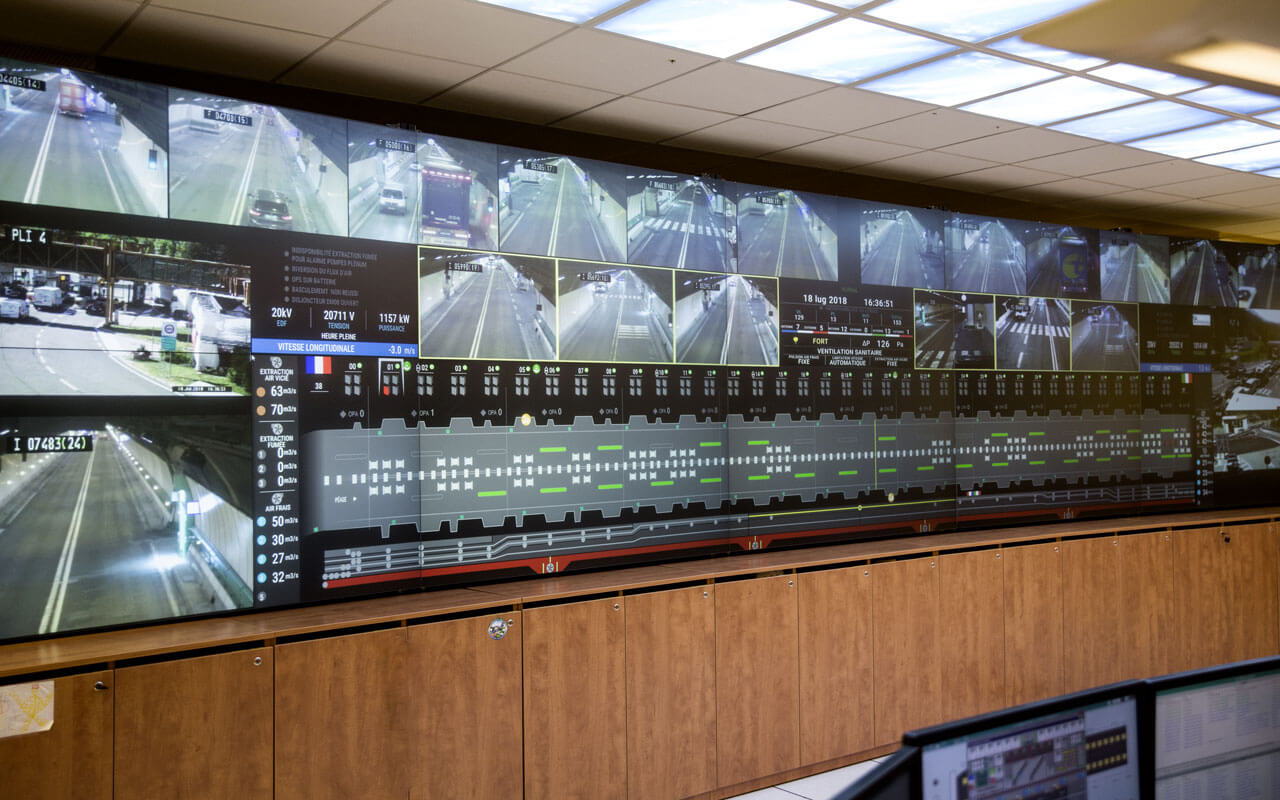 Four latest generation vehicles have replaced in 2013 the famous Janus . They equip the three permanent immediate intervention posts.
Unique in the world, this vehicle is fitted with innovative equipment, allowing it to have a greater power in action, by improving the protection of the intervention teams: 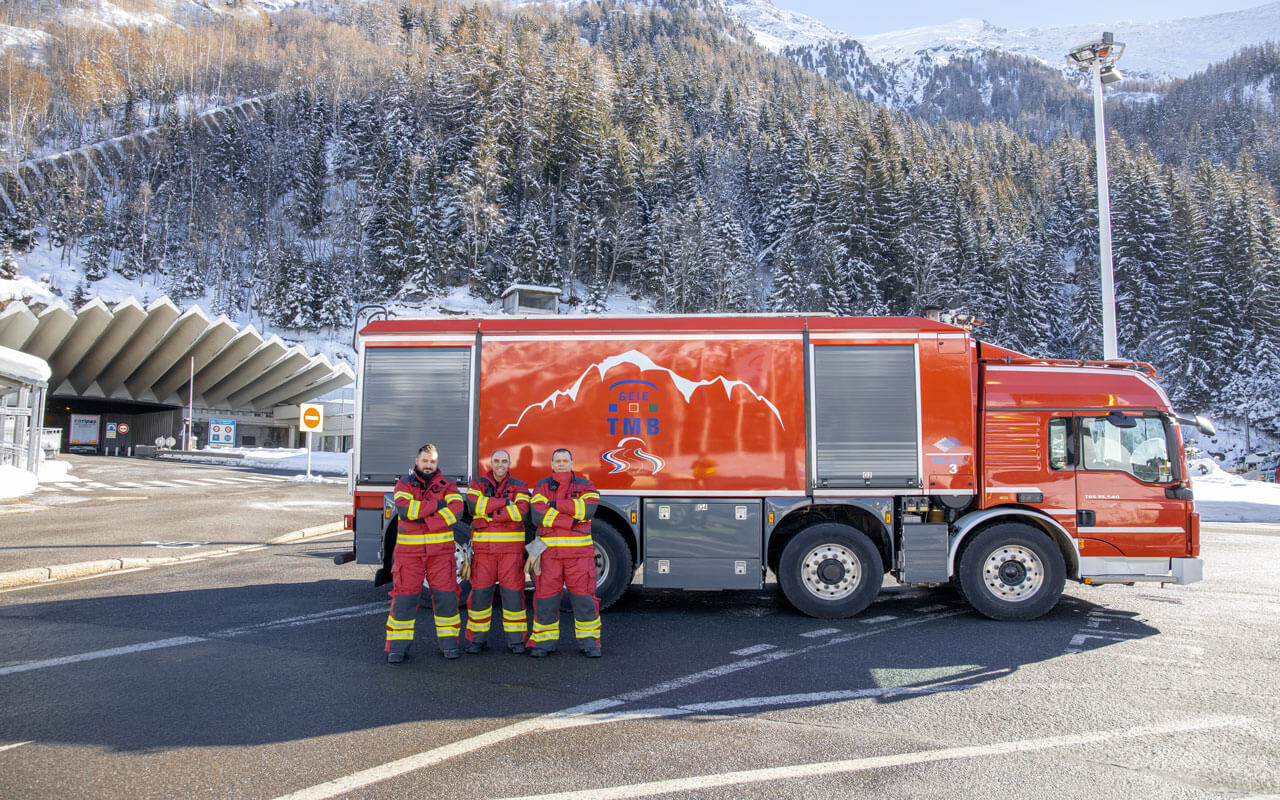 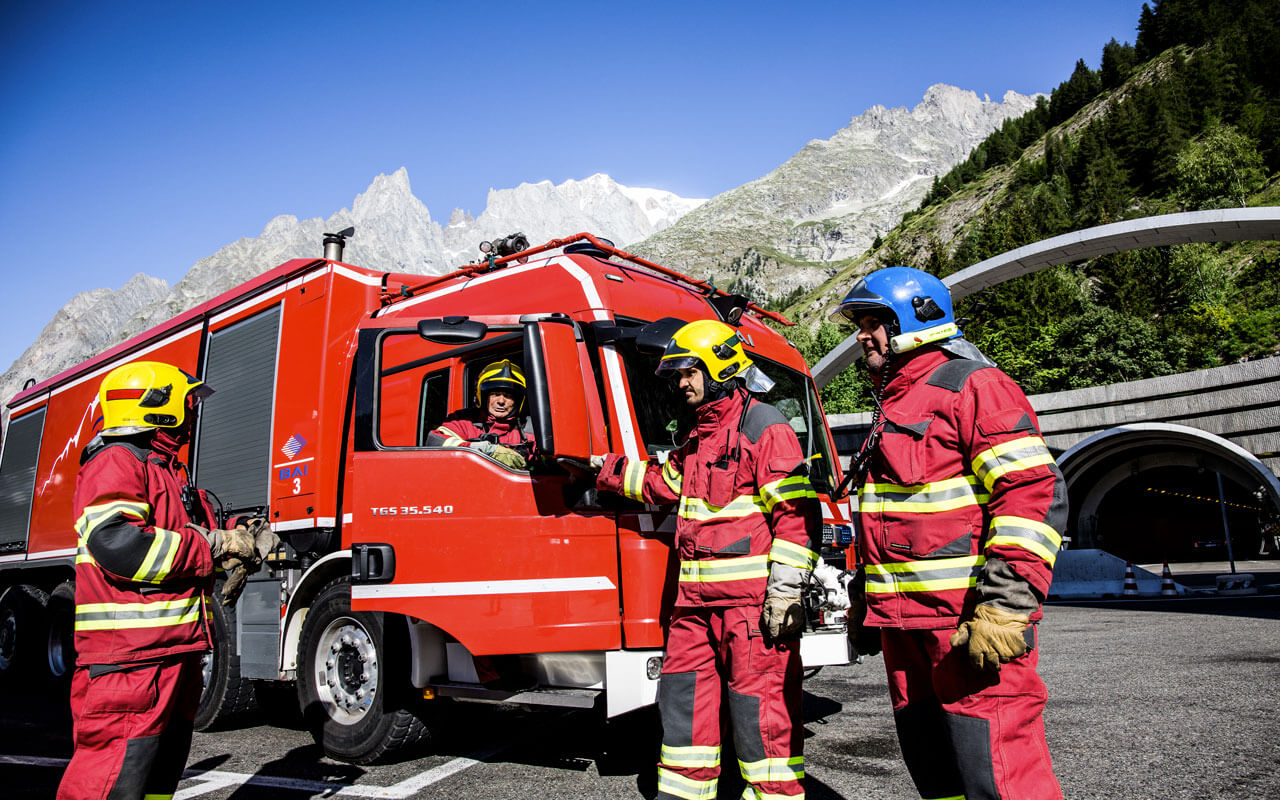 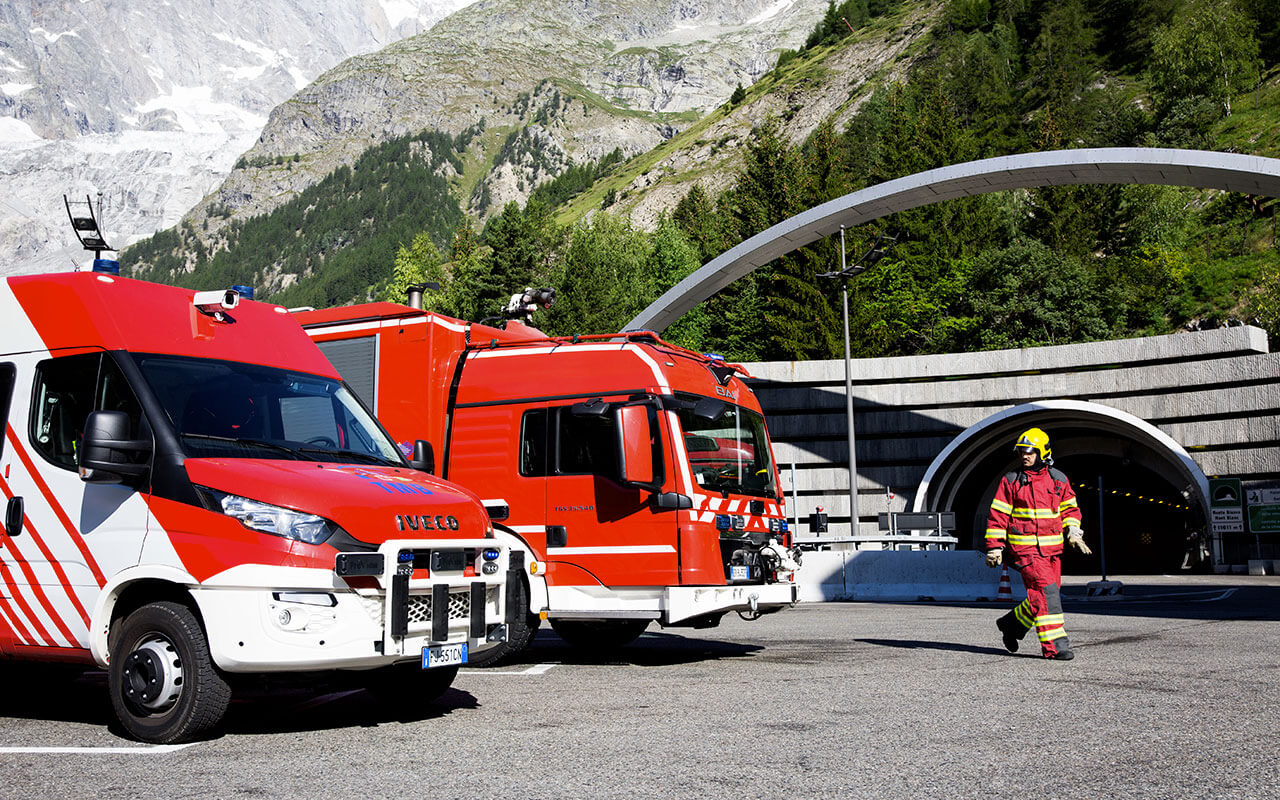 Piloting of safety equipment: using the most up to date technology

The Centralised Technical Management (CTM) is a system piloting computerised safety equipment. It analyses 35 000 items of data issued from the different surveillance points – cameras, sensors, detectors, etc. – and signals, via automatic incident detection, all the irregularities to the control post operators. According to the nature of the incident, the CTM proposes pre-established procedures and the activation of the relevant safety equipment: posting on the signs and broadcasting safety instructions to tunnel users, starting the ventilation system, the totally or partially interrupting in the traffic flow with the lowering of the half-barriers, etc.
A new CTM, called LOGOS (acronym of Localize, Organize and Manage Safety Operations) has been operating at the Mont Blanc Tunnel since November 2016, at the end of a long and complex test activity (approximately 12,000 tests) leaded in 2016 (during 25 nights of total traffic interruption) and more than one million check points. This pilotage system puts together all the latest technologies, particularly in the fields of data processing, tunnel activities management in standard conditions and simulation tools for staff training. 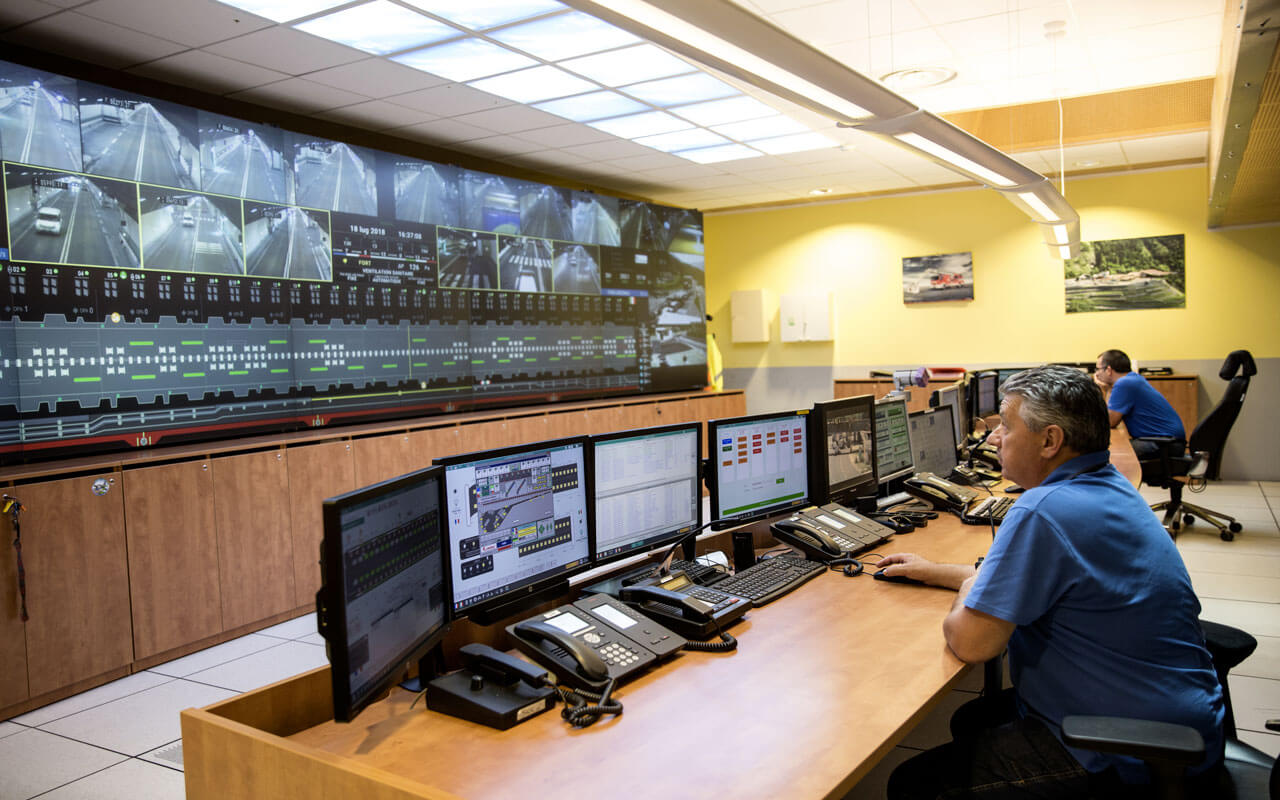 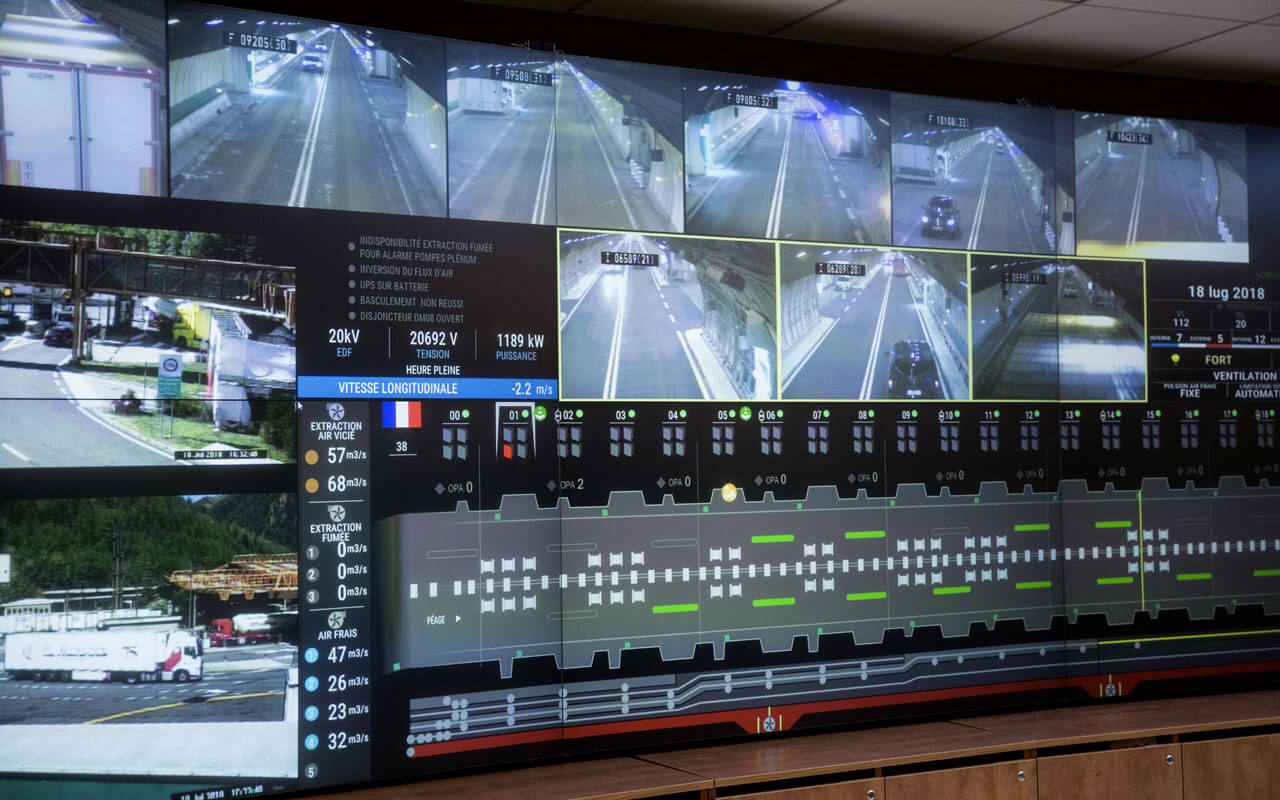 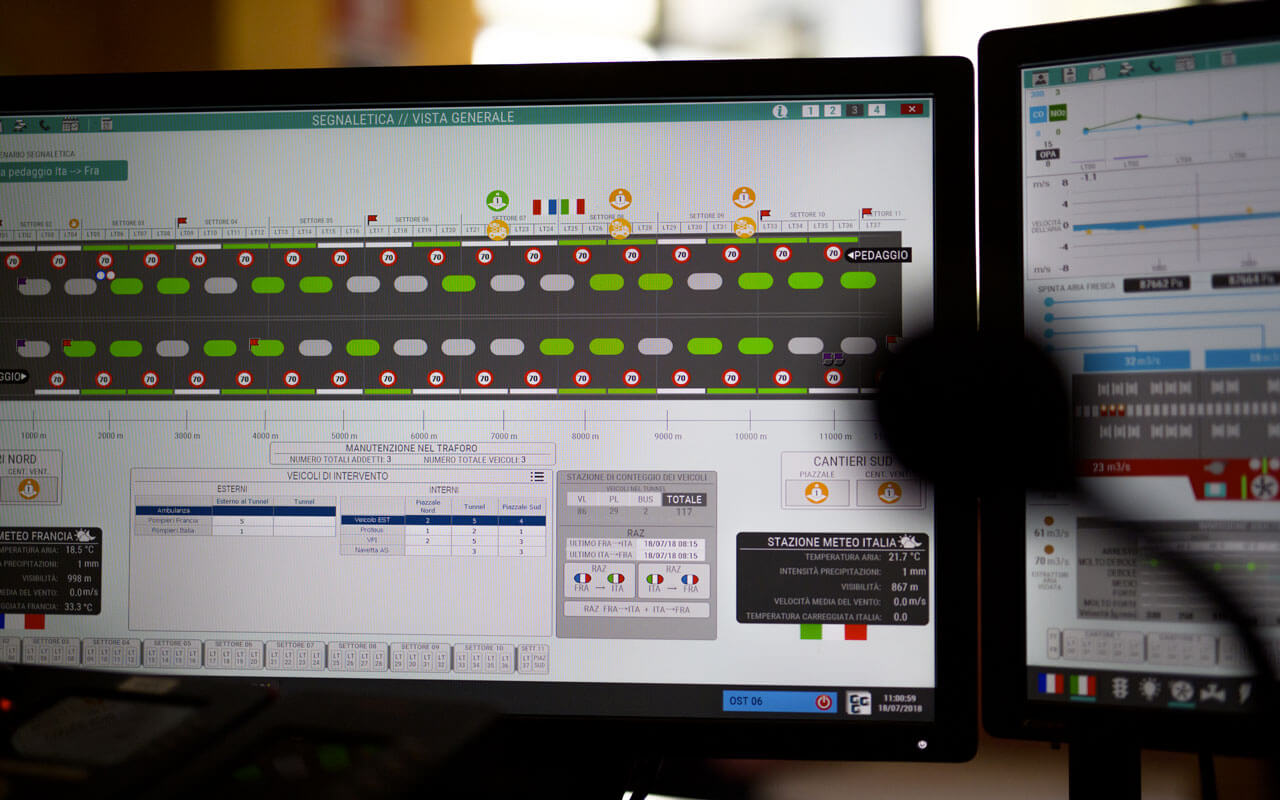 Study on the behavior of air flows

The quality of the ventilation system is an essential element for the tunnel users and the teams of the Mont-Blanc Tunnel.  The system aims in particular at containing smoke in the most restricted zone possible and to so avoiding its distribution. Air flow plays a role in determining the implementation of the system. This at the same time depends up on the nature of the current, on the ventilation and on the extraction realised in case of smoke extraction.
There is a study in progress to define the knowledge of these phenomena and to raise the efficiency of these ventilation systems.
An electric vehicle was designed and developed, in partnership with Modène University, for this study. This prototype is equipped with anemometers and instruments to measure and register all the readings throughout the tunnel, taking into account several parameters: the presence of vehicles, interaction between different types of ventilation, conditions of pressure, etc. The conclusions drawn from these tests will be exploited to optimise the ventilation system integrated into the new Centralized Technical Management. 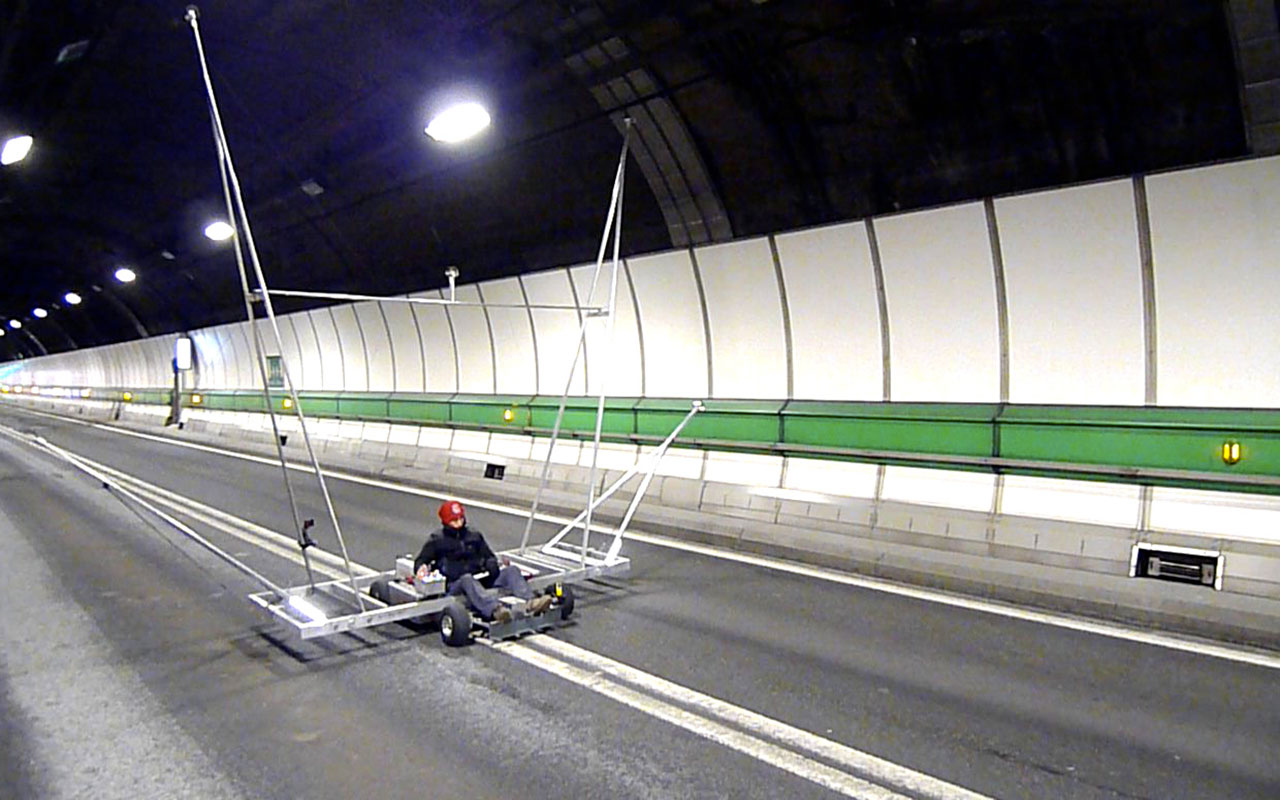 In 2012, the Mont-Blanc Tunnel conducted experiments with fire mitigation systems on the Spanish site of San Pedro de Anes (in a tunnel built specifically for the purpose of carrying out full-scale experiments on fire-fighting systems). The word “mitigation” is a term dear to risk management specialists that means “lessening”. Mitigation systems are not, therefore, extinguishing systems, but rather devices that help to contain harmful effects. This research programme focused on four priority objectives in the event of a fire: the safety of users, the safety of rescue services, the limitation of damage to infrastructure and the limitation of the period of unavailability of the infrastructure.
The results of these studies have been presented at several conferences, have been shared with the managers of other road tunnels, and have been published in several specialist journals.
As part of its “technology watch” activity, the MBT-EEIG will continue to focus its attention on any new technology that could improve tunnel safety.

The MBT-EEIG confirmed its ambitious intention to develop the innovation and to increase the technological development activity, at the service of safety, customers satisfaction and environment.
In order to identify the strategic axes in terms of innovation and technological development, a preliminary audit of the four departments of the MBT-EEIG and the functional management services has been carried out. The diagram below summarises the results of the audit. 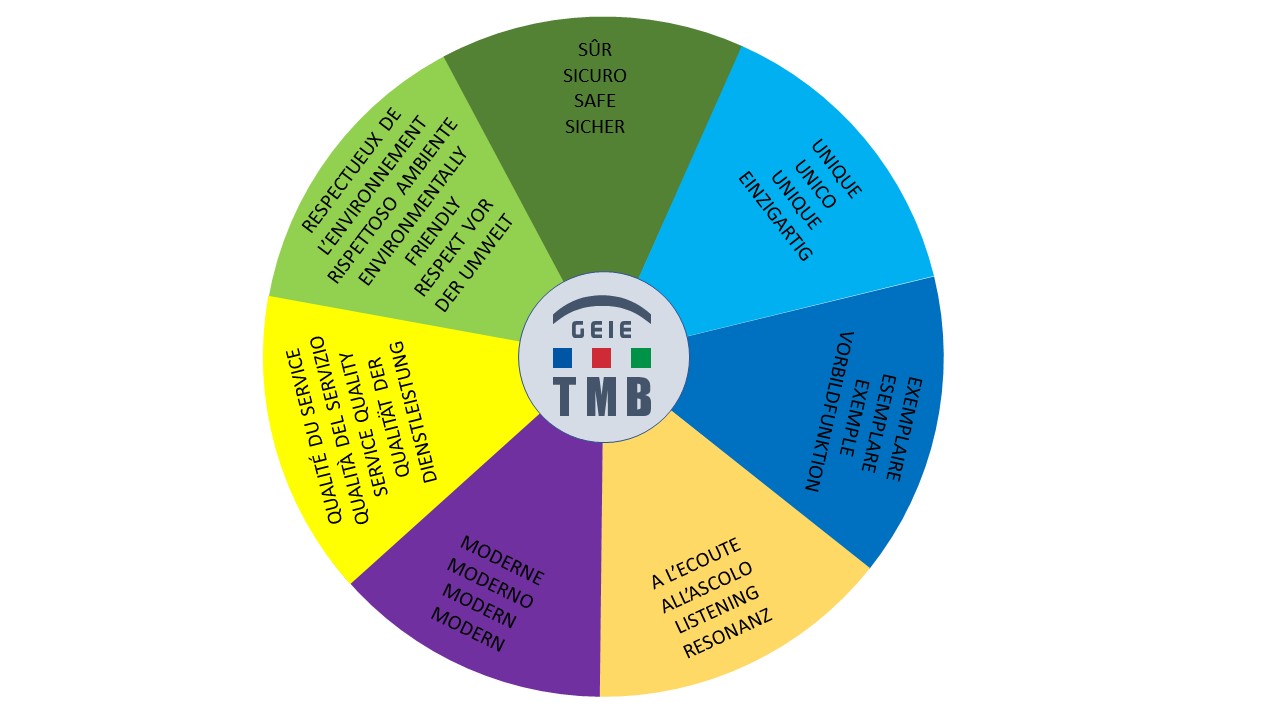 In order to make the most of the collective intelligence of the company’s resources, the management committee called for an internal Innovation Challenge and entrusted its coordination to the Innovation and Technological Development Service. All staff were invited to come up with ideas focusing on three main themes: user safety, customer satisfaction and the environment.
The Innovation Challenge in figures: 222 people involved - 109 ideas generated - 10 themes explored for 12 weeks - 56 mobilised internal explorers with 424.5 cumulative hours of exploration - 35 partner companies involved - 4 winning teams - 1 year duration.
We only use those technical cookies which are strictly necessary to ensure you get the best possible experience on our website, as indicated in our cookie policy.