The Mont-Blanc Tunnel, promoter of safety at international level

The Round Table on bidirectional mono tube tunnels, an association for the study and diffusion of best practices in safety

Road tunnels on the European continent are, at least for the moment, almost all “bidirectional mono tubes", i.e. they consist of a single pipe used for traffic travelling in both directions. There are not very many large ones, but normally they are very important because they open up the ground and shorten travelling distances on national or, more often, international routes, where large natural obstacles (mainly mountains) would mean deviations that are both long and tortuous.
Between the end of the last century and the beginning of this century, it became necessary to investigate the subject of safety. The analysis of criticalities, preventive actions, the evolution of systems and their performance, the adequate handling of incidents, are some of the essential aspects of this investigation. And because it deals with activities that can greatly benefit from comparison and discussion, it led to the idea of creating occasions for meetings concerning the "tunnels" that have common characteristics and, therefore, problems that are for the most part identical.
After some meetings with a "few friends" (St Gotthard, Frejus, Great St Bernard and Mont Blanc) between 2005 and 2009, the necessity arose to establish an association and 2010 saw the creation of the “Round Table on bidirectional mono tube road tunnels”. Today, 10 European tunnels (over 3,000 m in length) are part of the association : the first 4 were joined by the Somport and Bielsa-Aragnouet French-Spanish tunnels, the Arlberg in Austria, the Maurice-Lemaire in France, and the San Bernardino and Mappo Morettina in Switzerland. 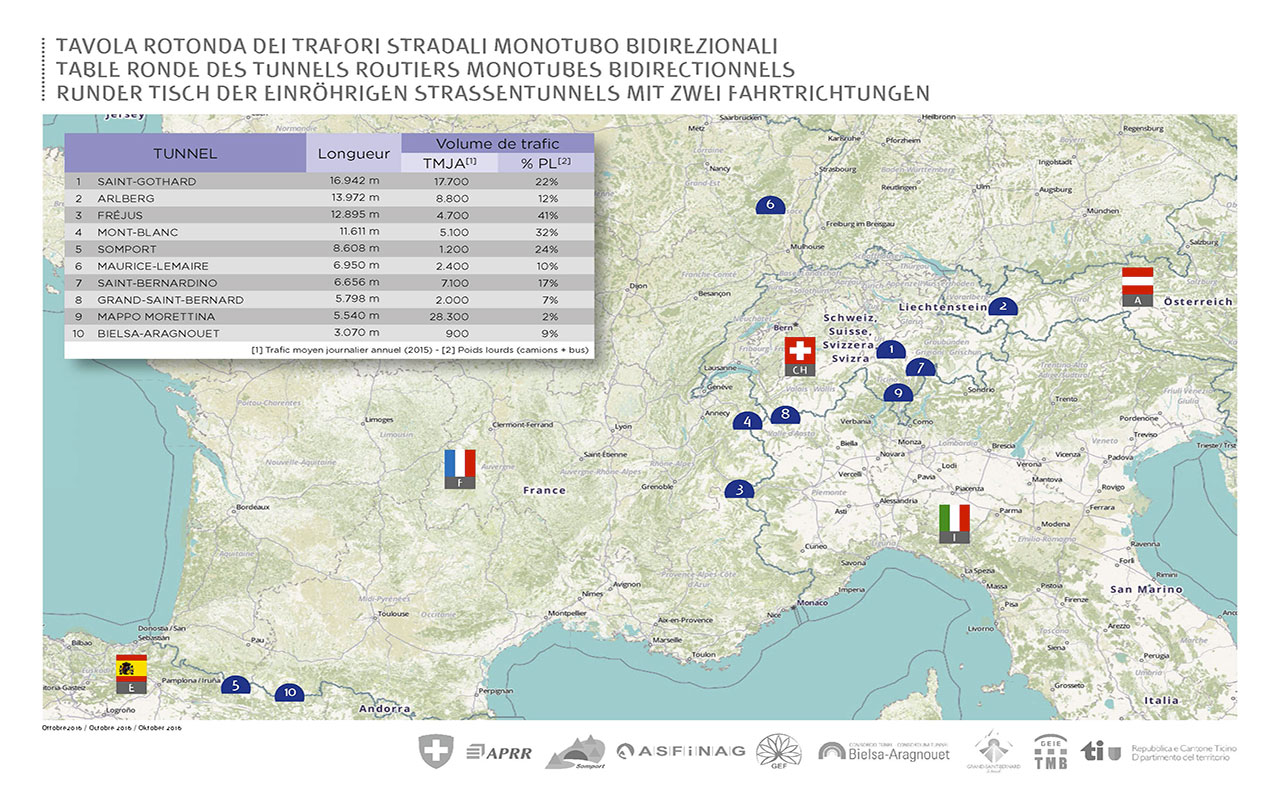 The Mont-Blanc Tunnel regularly participates in the work of GTFE, created in 1973 with the main aim of promoting cooperation among the various players in the management and operation of tunnels in service, under construction or planned.
Its operation is based on the exchange of experiences and information between operators, operator information concerning changes in regulations and techniques regarding tunnels, and the transmission of information on the daily operation of tunnels to those who draw up the doctrine or execute the projects. The members of GTFE also contribute to the validation of documents drawn up by CETu (Centre d’Etudes de Tunnels based in Lyon).

Periodically, TMB organises an awareness-raising campaign about observing traffic regulations and rules of behaviour, in particular the regulation that imposes stopping immediately and immediately switching off the engine if the driver sees an anomalous emission of smoke from the vehicle while transiting the Tunnel. The initiative enables the creation of exchange opportunities among TMB personnel and road transport professionals with regard to questions linked to safety and mobility, and getting to know drivers better based on their nationality, how often they travel through the Mont-Blanc Tunnel, the languages known and understood by them and, ultimately, to improve the effectiveness of our communication.

The acquisition of new knowledge and the sharing of experience on security, technology, intelligent transport, innovative solutions, etc. is an essential condition for the so-called “technology watch”. To this end, representatives of the MBT regularly participate, sometimes as speakers, in international seminars, events and congresses, for example ITS World in Montreal and Copenhagen, AFTES in Paris, World Tunnel Congress in Naples, AIPCR and ASECAP congresses.

The Mont-Blanc Tunnel's technological innovations, organisation and safety devices arouse considerable interest in a wide variety of people, whether they are sector professionals and operators, students or citizens visiting it in a personal capacity.
Every year, the infrastructure is visited by experts from all parts of the world, who come to the Mont-Blanc Tunnel to share technological and organisational solutions and to increase their experience of specific subjects.
The visits that involve large numbers of people and the specific purpose by which they are distinguished, include those by bodies dedicated to training drivers of buses and heavy vehicles, but also members of cultural associations and groups of citizens who show a lively and special interest (educational visits by schools, representatives of institutions and public services, etc.). 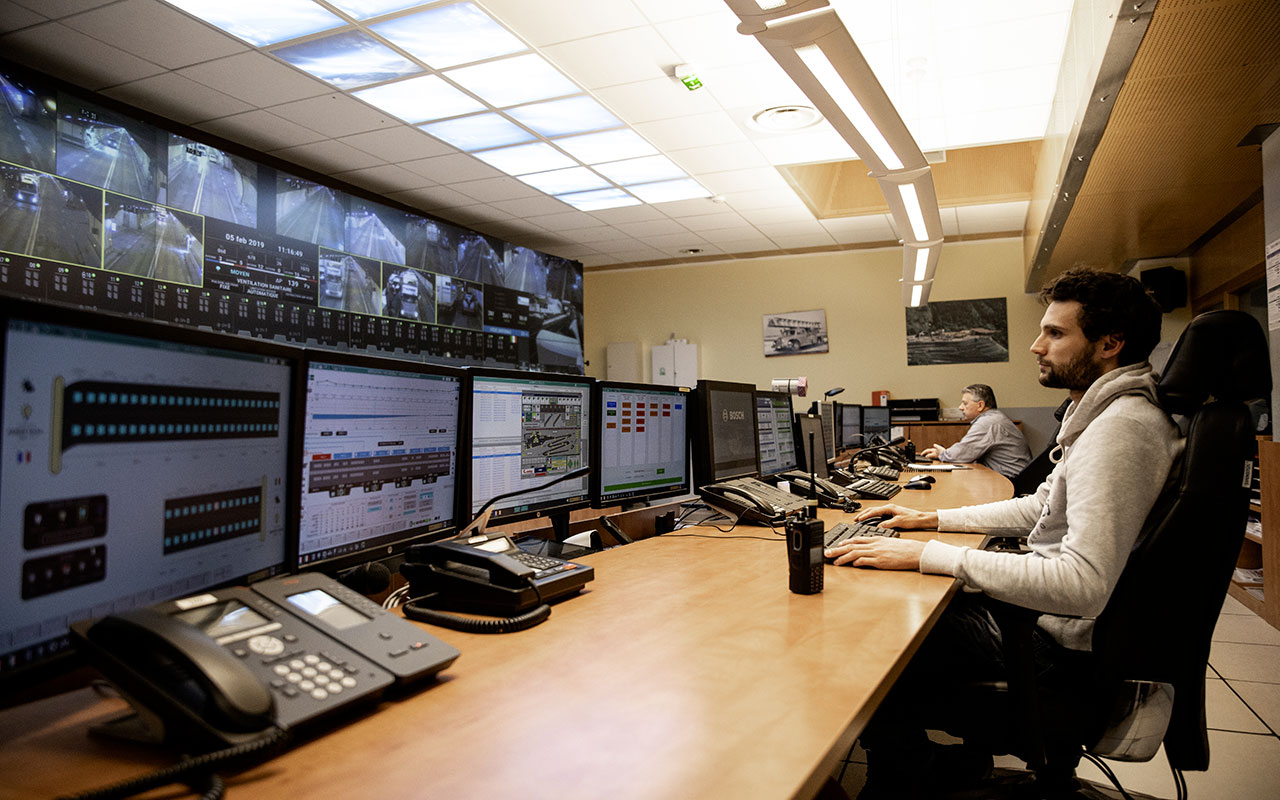 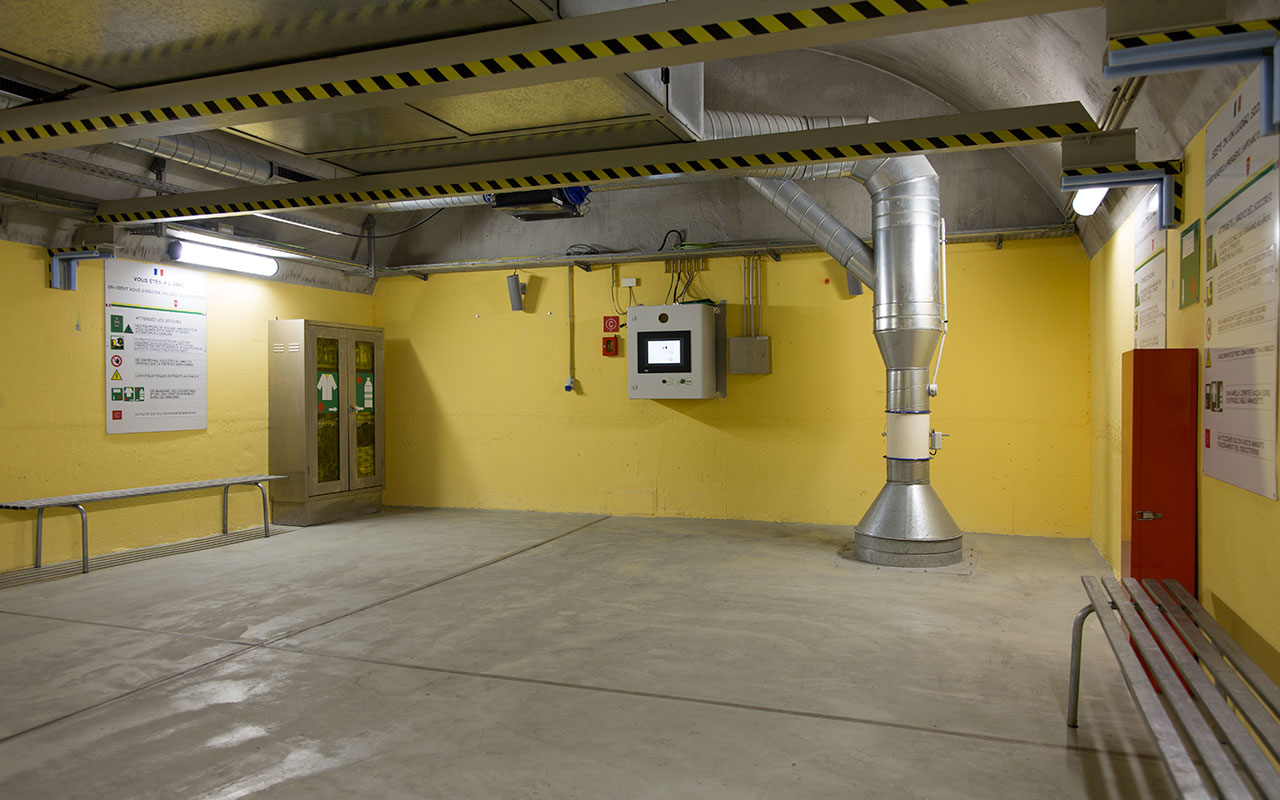 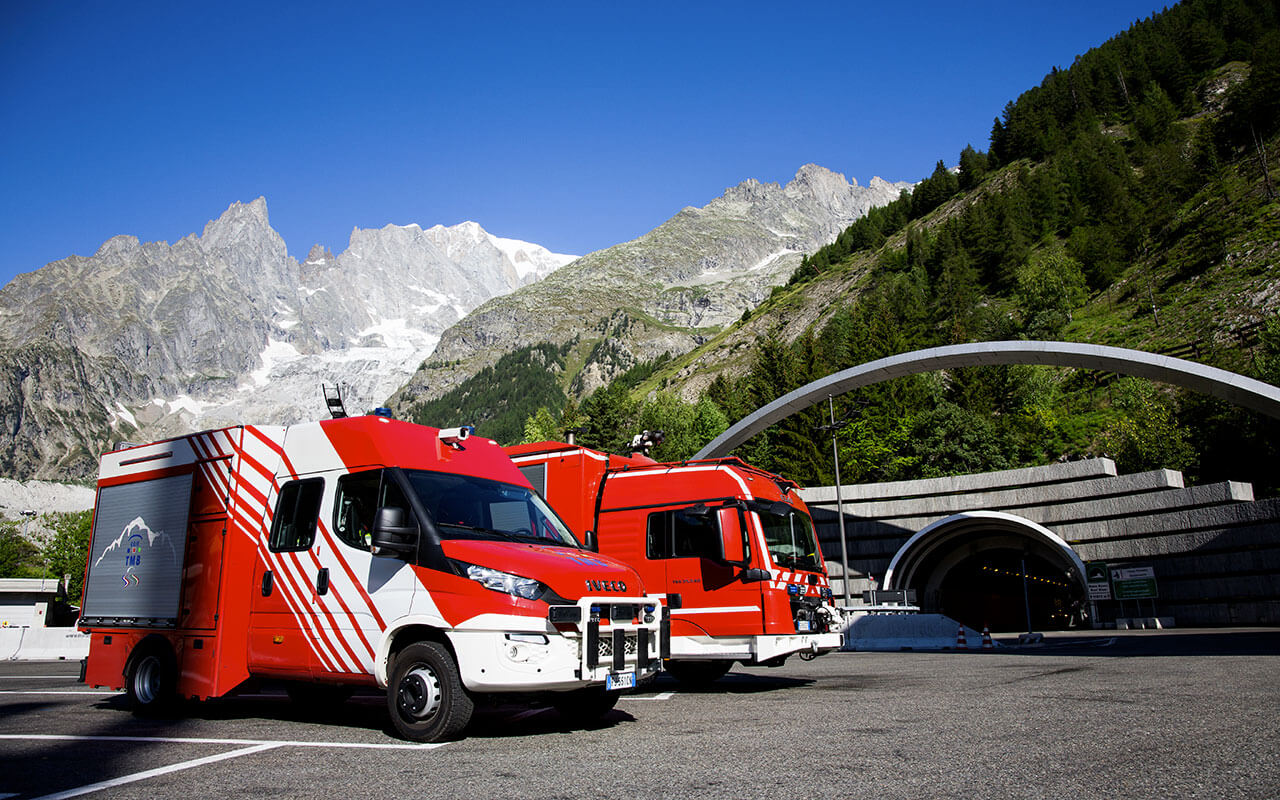 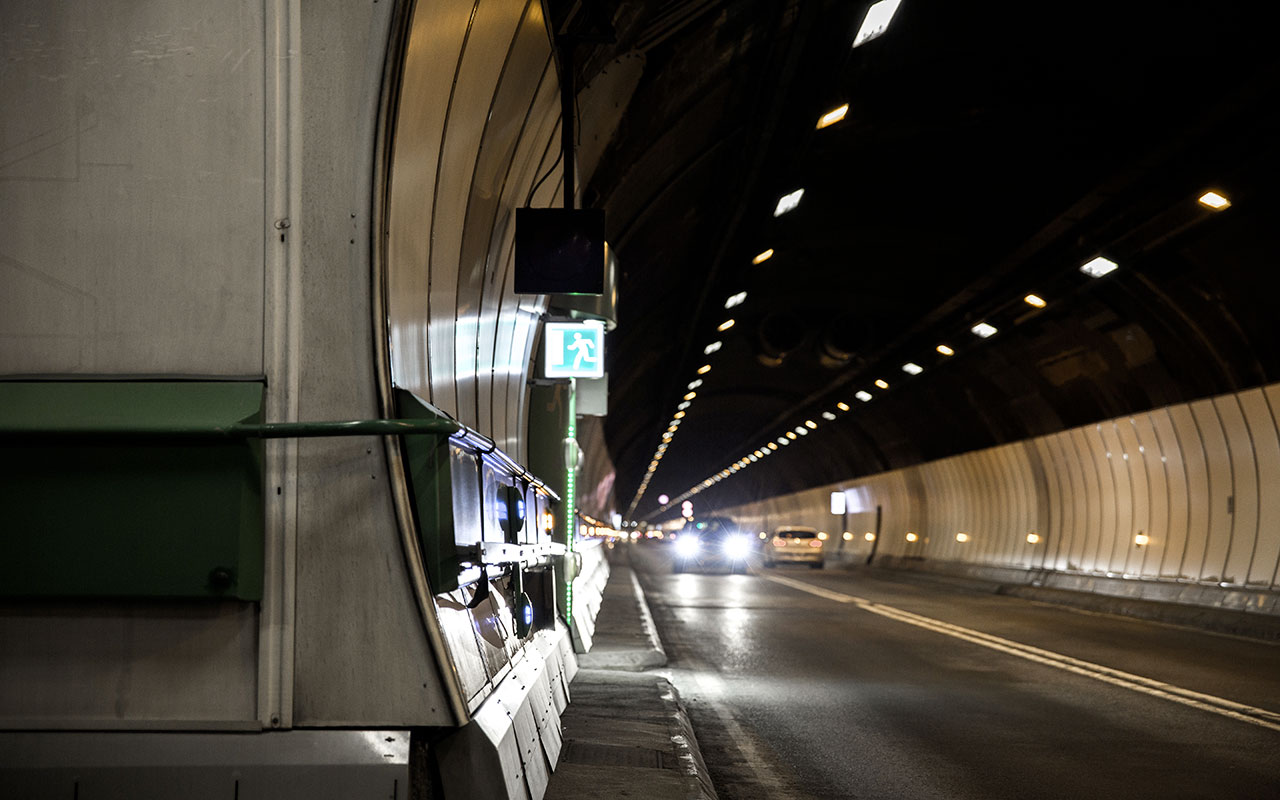 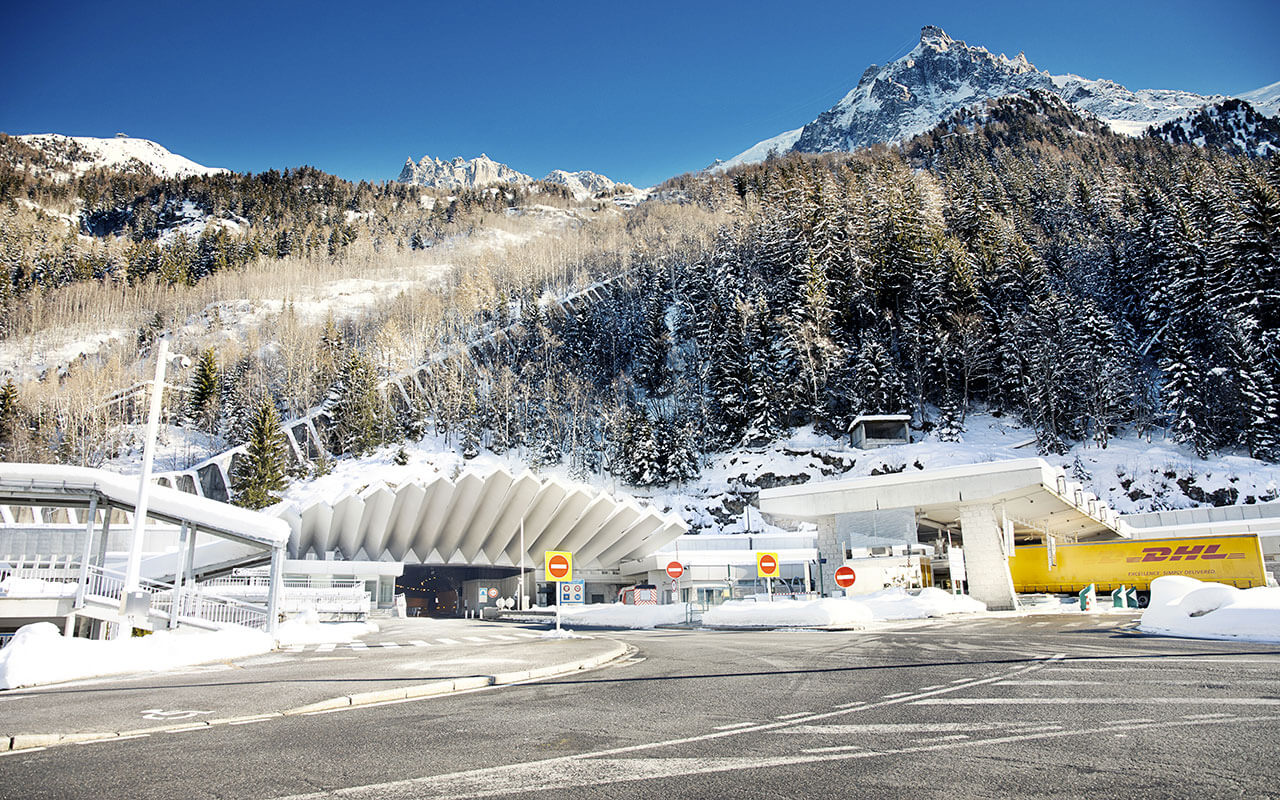 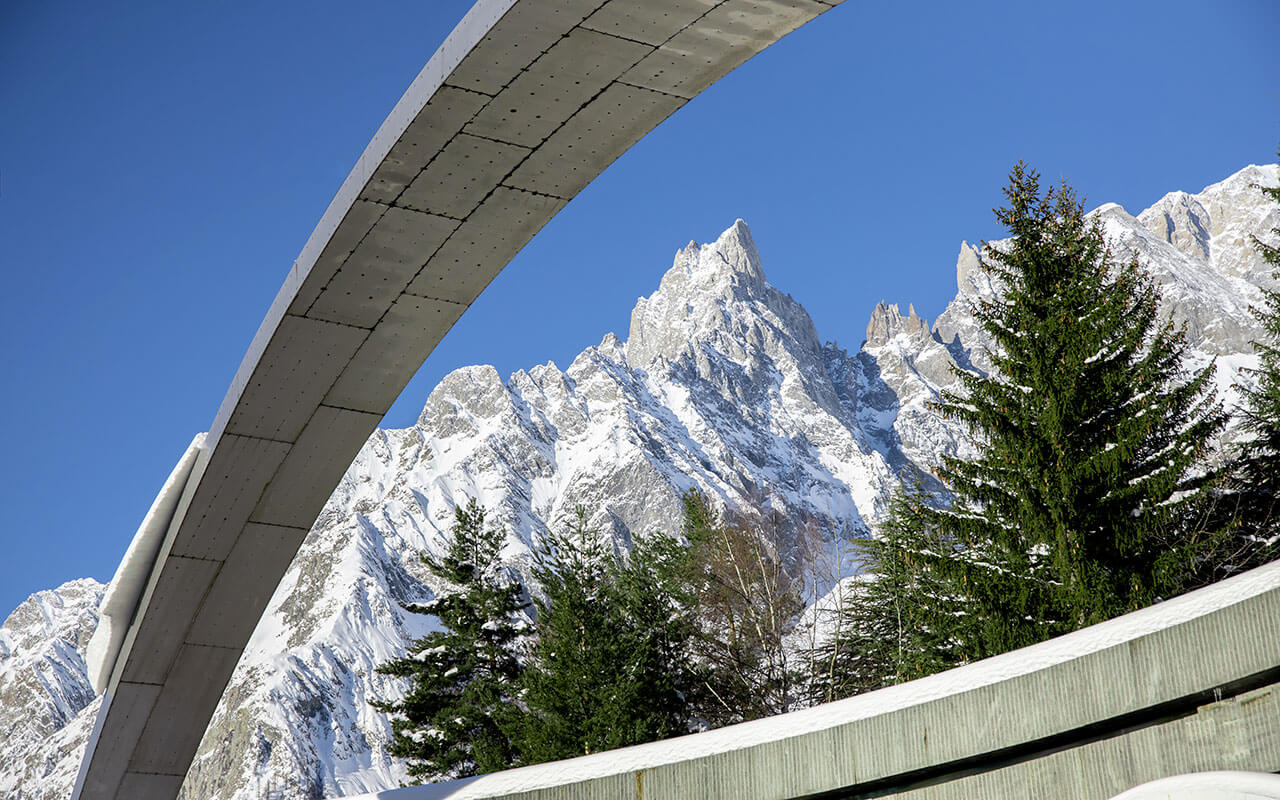 Ask for information or book a visit